This past week was a taxing one, both with work and running. I don’t know if it’s because of this damn tropical plume that’s settled in over the east coast drenching us in humidity and rain, or because of the stress and crap food I ate this week, but this week was quite a damn effort. Work was non-stop and for whatever reason, normally easily achievable times were difficult.

Although this week was a struggle, there were two things that made Week 2 memorable:

As I wrote earlier in the week, I was in Newport, RI to help host a sales conference. Although the prep and professionalism needed to host such an event takes some of the fun out of being in what is a great town, it was still a good time.

Besides enjoying some native oysters and local cocktails, one of the things I made sure I did was set out early Thursday morning for a run. While everyone else were sleeping off the night before, I set off on a 6.6 miler amongst the biggest damn mansions I’ve ever seen. Well worth turning in an hour or two (or three) earlier than everyone else.  Call me a fuddy duddy, but it was well worth it.

Just an FYI, I don’t want to sound ungrateful, because having the opportunity to go to Newport for work is badass and celebrating my cohorts successes was terrific, I just wish I was there for longer. The only thing I truly regretted about Newport was eating at Flo’s Clam Shack (a picture says a thousand words). 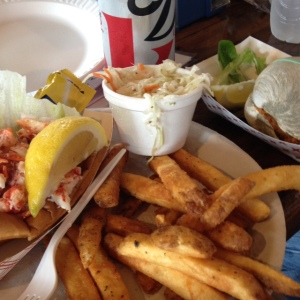 Was this fried debauchery one of the causes of my malaise this week?

I can’t speak for all endurance athletes, but there’s something special and extremely motivating about le Tour. As a former cyclist, it makes me totally miss my bike; but it also makes it a little easier to get out and pound pavement.

The next time you’re feeling bad about having to hit the road, just think about little Thomas Voeckler going solo for a mountainous 112 miles to bring an entire nation pride, or Mark Cavendish sprinting away at 45 mph to win a bunch sprint after being in the saddle for 7 hours. Le Tour is a great motivator…run with it!

The Tour de France has a way of motivating unlike any other sporting event.

Now that this week is done, I’m really looking forward to putting the negatives of Week 2 behind me. Week 3 should shape up to be a really great week, both in terms of eating and training. On Wednesday I’m running the HASLAW Manchester 5k and Mile. Plus, I can’t wait to have some time to relax…FINALLY!

I hope you all have a kick ass week and Happy 4th of July!