Week 3: A fast 5K, a faster mile, and hedonistic Boston

This week was filled with high heat, humidity, and lots of distractions. Overall, that sounds pretty similar to week 2; however for as much as Week 2 was a pain in the ass, Week 3 was awesome.

Besides containing one of my favorite holidays, this week also had a race and a 30th birthday to celebrate…not to mention four consecutive days of no work! Yay!

The first few days were rather uneventful. I re-arranged my schedule to go with a run on Monday and then yoga for Tuesday to allow for a little recovery prior to Wednesday’s races and I’m glad I did as the two races went very well.

The Manchester Mile and 5k is a pretty cool even that couples together two races for those down for the challenge. The course for both a partially downhill which allows for solid times; however it’s a runner’s willingness to push to their ends that will allow them to shine. It’s because of this that both races attract some of the best runners from around New England.

The 5k was held at 7PM and let me tell you, it was still damn hot and the air was molasses. Regardless, I went out hard and stayed as near the front as I could without gassing myself. After the initial downhill was a mile of uphill which was a bada-bitch; however it was followed but a half-mile of down before flattening out for the final half-mile leading to the finish line. Although mentally I lapsed for about 3 minutes around mile two, I still flew and finished 16th (5/79 in men’s 30-39) at 19’15”. Overall I was happy with the finish; however my goal was sub-19 and if not for the lapse of focus, it would have been mine.

May not have been pretty, but I was happy!

The Mile started at 8PM and luckily during that hour, the heat ticked down a bit. Mentally; I was not as prepped at the start as I was taking in the serious of some of the elite. The field was staggering: former UConn badass miler Brian Gagnon, Stonehill All-American Pat Fullerton, U of Richmond’s Nicol Traynor, and UNH’s star distance runner Keely Maguire just to name a few. So what can this 33 year-old body expect to do versus these elite 22-25 year olds? Not a damn thing! However, I was still down to run my own race and see if I could best 5 minutes for the mile. Let’s put it this way, it may not have been pretty, but 4’53” is fucking sexy!

July 4th was obviously a blast. A time to reflect, give thanks, spend times with family, grill and drink good juice. I even had a chance to get creative with my aminos! Alas, I covered the 4th earlier in the week in ‘Merica and Me, so I’m going to move on for now. 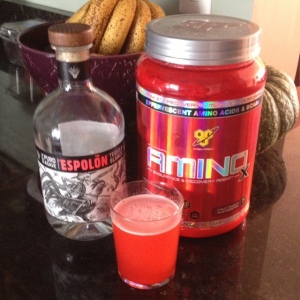 I don’t want people to think I’m too serious 😉

The remainder of the week was all about racking up some mileage. Pretty status quo, until we approached the weekend. Knowing I had my wife’s 30th to celebrate on Saturday and that I’d likely not be in any condition to put in 13 miles on Sunday, I made an executive decision and broke down the mileage to be spread out over Friday and Saturday. The key to any successful plan is to allow it to be malleable!

Then we have Boston and the big 3-0 for wifey. What a hedonistic adventure.

We started with an epic meal at Top of the Hub. Seriously, special occasion aside, the kitchen there is firing on all cylinders! I decided to splurge and go with a special wine, even though my three dinner companions all went with the prix fixe with wine pairings. The list was pretty decent; however I opted for the first wine I saw when walking past the cellar upon entering: ’06 Continuum. Tim Mondavi is a special talent and the legacy he and his father, Robert, have created at Continuum is special. 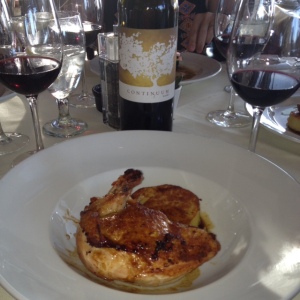 Great meal and great wine, all to celebrate a great lady.

Ok, this is getting wordy so I’m going to hit it and quit it.

After our epic dinner, we went to Limelight Stage and Studios for two-hours of karaoke bliss then set off to enjoy a stogie and Port at Cigar Masters. Our final stop after closing down the smoke shop was to Samurai for 1AM eat…and boy did we eat. We eventually turned in at around 3, mission accomplished.

Beep…Beep…Beep, or rather snoooooore. Up and at it, I was out for a quick 4 miler at 7AM and then hit up the hotel’s gym and pool all prior to the others waking up. I thought this productive start of the day would be enough to offset the gluttony of the night before, but then we hit the Cracker Barrel. To put it simply, I had to hit the pavement for another run in the blazing heat as soon as we got home if I wanted to be able to look myself in the mirror.

So that was Week 3. Hella fun, hella motivating, hella memorable.

Have an awesome week!